Here’s How Weird Things Are Getting in the Housing Market 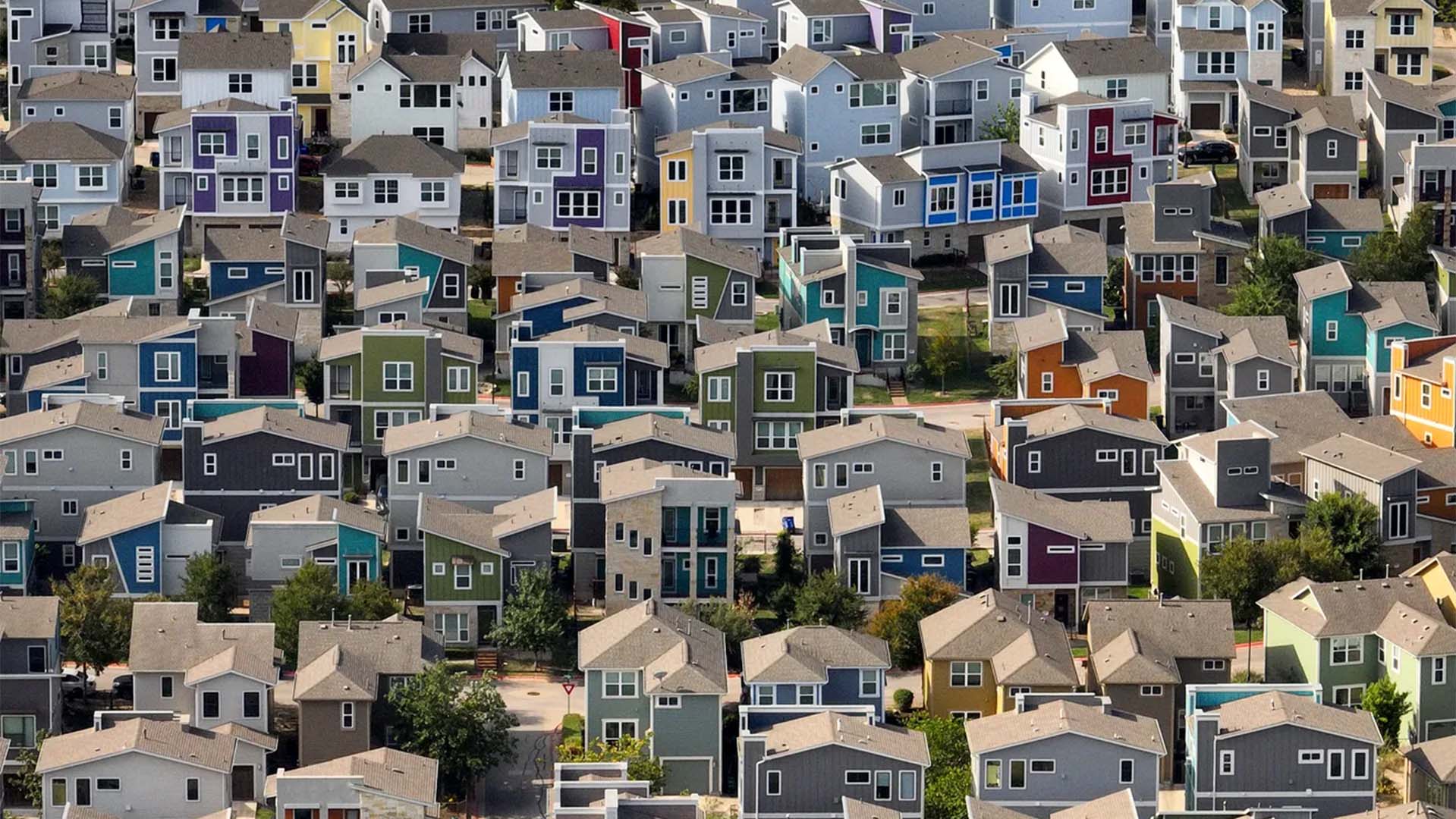 Higher mortgage rates generally don’t bode well for the housing market, and the US has just seen one of the steepest increases in history.

Would-be homebuyers are facing massive sticker shock right now, with measures of affordability worsening at their fastest pace on record. In fact we’re seeing a number of milestones reached in the market, with spreads on mortgages and benchmark interest rates reaching levels unseen in decades, while the volume of new sales is slowing at a faster pace than even during the aftermath of the global financial crisis.

So does this mean that home prices are about to collapse? That’s one possibility. But another possibility is that the housing market just gets weird.

James Egan, Morgan Stanley’s US housing strategist, recently cut his house price forecast to show a year-over-year decline in December 2023. But he’s expecting a fall of just 3% — a far cry from an outright collapse.

The problem is we’re in uncharted territory. Yes, mortgage rates have shot up, crimping affordability. But at the same time, unlike in the era prior to 2008 and the bursting of the subprime mortgage bubble, there are very few forced sellers and therefore very little inventory.

“A lot of these statistics that we use to forecast things like housing activity, and by that we mean home sales or housing starts as well as home prices, are at levels that we either haven’t seen before, or if we’ve seen them, we haven’t seen them for decades,” Egan says in an interview on the Odd Lots podcast.

“The listings of existing homes available for sale — we have that data going back for single unit homes to the early 1980s — It was never lower than it was earlier this year. We’ve been increasing just a very little bit off the bottom for the past three months,” he explains. “But we think that they’re going to keep listings tight, which will keep home prices more supported.”

The upshot is that because the overwhelming number of homeowners are on fixed-rate mortgages, and because home equity is still high, most people are insulated from the coming shock. But this insulation comes with a cost, what Egan calls the “lock-in effect.”

The increase in house prices in the years since the outbreak of Covid-19 has been very dramatic, exceeding the peaks from even the early 2000s. As Egan notes, each of the last 16 months represent stronger growth than the previous record prior to the global financial crisis. Naturally that raises the question of whether such rapid run-ups in house prices are sustainable.

“Each of the past 16 months would’ve been a record in year over year growth if we were comparing it to 2004 and 2005,” Egan says. “We have significantly surpassed that when you add mortgage rates up over 300 basis points since the beginning of the year. Those things are going to combine to lead to the monthly mortgage payment on the median priced home up over 50% year over year.”

The average 30-year mortgage rate has increased from less than 3% in 2020 to almost 7% now, according to the Mortgage Bankers’ Association. That’s the highest since the early 2000s. But that sizable move has been surpassed by another key metric: the spread (or difference) between mortgage rates and benchmark interest rates as measured by the 10-year US Treasury yield.

With the economic outlook so uncertain as the Fed raises rates and with volatility in the bond market markedly higher than it used to be, many big investors have shied away from buying mortgage-backed securities and that’s helped to contribute to the higher cost of borrowing to buy a home. At the same time, the Fed has also stepped away from the market as it winds down its balance sheet.

The jump in home prices combined with increasing mortgage rates means that housing affordability is now deteriorating at an unprecedented pace, especially when compared to average income. The below chart shows the year-over-year change in the monthly mortgage payment on a median- priced home as a share of average household income (in blue), plus the year-over-year change in the monthly payment (in gold).

“We’ve deteriorated incredibly substantially,” Egan says. “The GFC that year-over-year deterioration never exceeded 30%, we capped out in the twenties. But why we think home prices aren’t going to crash here, why we do think this time is different is because the question we have to ask after affordability deterioration is who’s affordability just deteriorated.”

As Egan points out, it’s worth considering just whose affordability is actually deteriorating. Most homeowners have fixed-rate mortgages and the majority of them refinanced in recent years to take advantage of ultra-low interest rates, meaning affordability is less of any issue for existing homeowners than it is for would-be owners. You can see the extent of the refi activity in the below chart, which shows Morgan Stanley’s Truly Refinanceable Index, which calculates what proportion of the conforming mortgage universe has an incentive of at least 25 basis points to refi. The index is lower than at any point since at least 2005.

“When you consider the record amount of mortgage origination volumes in 2020, the fact that we broke that in 2021 for a new record amount of mortgage originations, most of these homeowners were able to either buy their home or refinanced their mortgage at historically low rates,” Egan explains. “Their affordability is locked in for 30 years. They’re not seeing affordability deteriorate. This deterioration is coming for first time home buyers. Prospective home buyers. That’s where this sits.”

That homeowners who were lucky enough to secure lower rates don’t have much reason to sell into an environment of higher mortgage rates and softening prices, helps create a ‘lock-in’ effect as existing homeowners refuse to put their houses on the market.

“They’re kind of locked in at their current homes at these lower rates,” Egan says. “So what we think we’re already seeing, what we anticipate continuing to see going forward, is that the inventory, the listings of existing homes available for sale, we have that data going back for single unit homes to the early 1980s, it was never lower than it was in earlier this year.”

So many homeowners staying in place thanks to higher mortgage rates could help put a floor prices. But it will almost certainly be bad news for realtors as new home sales fall off a cliff. Sales volume is already decreasing at a faster pace than during the global financial crisis thanks to the combination of deteriorating affordability and low supply of new homes hitting the market.

“When a home is transacted, it looks at the last time that home was transacted,” Egan says. “And so if we’re not going to be selling those homes at lower prices than they were purchased, that’s going to help support home price activity. But on the other side of this, it means that that existing homeowner is also not buying another home after they sell theirs, which we think is going to kind of exacerbate the decrease in sales volumes.”

Of course, when anyone sees a chart like home sales falling at the fastest pace since 2008, they’re likely to wonder whether we’re heading for a rerun of the subprime mortgage bubble that sparked the financial crisis. For Egan, there are a couple of factors which make things different this time around, including a structural shortage of housing in the US. But perhaps the biggest consideration is credit availability.

Pre-2008, it seemed like everyone could borrow oodles of money to take out mortgages on multiple properties. But lending standards tightened significantly after the financial crisis, and problematic mortgage products like Option ARMs have all but disappeared from the market. That means that people who own houses now should in theory be able to hold onto them even as economic growth slows.

“You just do not have those resets. You don’t have a homeowner that’s reliant upon the credit availability environment going forward and credit availability it tightened,” Egan says. “We gave up six years worth of easing in the six months after the onset of Covid in March 2020. We’re at the tightest levels we’ve been in in effectively 20 years. And if anything, because of risk weight asset stresses at at large banks, we think the path from here might even be towards tighter lending standards.”

Of course, much of that statement depends on the extent to which higher interest rates hit the economy. If things get bad enough and many people lose their jobs, we could see a wave of distressed sellers which could free up inventory and put downward pressure on the market.

“Because of the lack of reliance of homeowners on the ability to refinance, we don’t think that’s going to force them into defaults and foreclosures,” Egan says. “But that also means that we think that the risk of a dramatic increase to defaults and foreclosures that could, if we think about what could bring home prices down, it’s those distressed transactions, those forced sellers.”