The multifamily market is entering the time of year when rent growth typically occurs and there is no indication of any slowing in the market, according to Yardi Matrix’s latest report.

“Our latest multifamily national report presents a $2 rise in average U.S. rents in February and year-over-year growth of 3.6% as evidence of the sector’s continuing strength,” the company says in the report.

“Our February survey of 127 major U.S. real estate markets shows that demand, bolstered by a strong job market, shows no signs of slowing. Rents averaged $1,426 for the month.

“The market has strength to perform well for a while, even if the economy or other commercial real estate segments slow down,” the report says. “Occupancy rates have ticked down slightly, but absorption has been no problem.”

Phoenix takes over the top spot in rent growth

Multifamily continues to perform well despite a long market run

Demand has shown no signs of slowing, as the job market has remained very strong, with unemployment below 4% and wage growth accelerating to more than 3%, the report says.

Metros with strong population gains and healthy job growth have benefited the most from the demand picture. Phoenix and Las Vegas are well above the rest, with growth dominated by Southwest and West Coast markets. Other top rent-growth markets—such as Sacramento and the Inland Empire—are near the top due to the combination of robust demand and weak supply growth.

With the marketing entering the rent growth phase, all signs point to this year being no different. 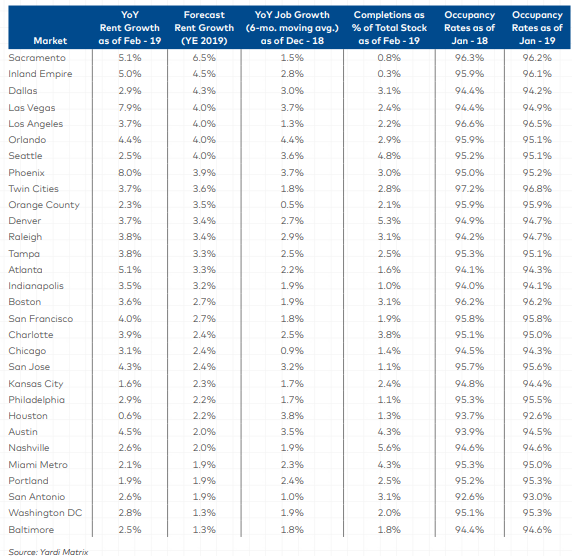 It is notable that the homeownership rate has climbed over the past year to 64.8% in the fourth quarter of 2018, from 64.2% a year earlier.

The most significant change came from 35-to-44- year-olds, whose homeownership rose 220 basis points year-over-year to 61.1% in fourth quarter of 2018.

“What’s interesting about this is that it could portend social change heralded by some analysts, who have forecast that millennials were merely delaying— not shelving—marriage and family. In this scenario, older millennials will increasingly settle down in the suburbs, have children and seek to re-create the picket-fence lifestyle of their parents. If that’s correct, there could be a weakening of demand for urban apartments, since these households will give up the more amenity-rich cities and inner-ring suburbs in favor of better schools and more privacy.

“Could this be the start of a longer-term trend? Possibly. The data would have to change more significantly and for a longer period of time before we can make any pronouncements with certainty,” the report says.